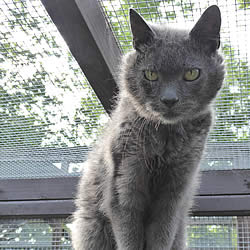 Flint has been with us at Pawz for around 4 years and we fear that he will live out his days here.  He seems happy in his pen as he has a lot of space, but is there a better option for this old boy?  He is elderly, a bit stiff and it would be nice if Flint could enjoy some home comforts in his twilight years.

He arrived at Pawz when his owner died. She had 4 cats that were all very timid and that is why she had them, nobody wanted them.  Sadly, nobody would take them and the family wanted to put them to sleep. We had a communal space and they all moved in.  The others are all in homes because they learnt to trust humans faster.   Flint does not want to be stroked but he does always come to see us when we go in with the food. He is getting a lot more sociable but he doesn't want us to touch him.   He isn't aggressive. The worst you get is a hiss, he never lashes out. It's unlikely that Flint will ever change but he will get used to a new home if one is offered.

Flint loves his food and it a good way to make friends with him.  He has always lived with other cats so he could easily move in with another freindly cat, he has no aggression towards other cats.   He loves the outdoor space he has access to at Pawz and enjoys sitting high up where he feels secure.

Do you have the space to let Flint live out his life in peace? You never know, maybe you will get a surprise and find that he wants to be with you more than he even knows yet!  You just never know what happens when a cat like this goes into a loving home.