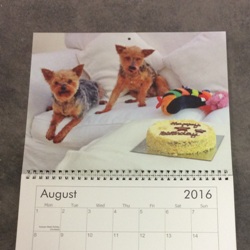 A year ago we were asked to rehome two elderly girls Sally and Tara.   Amazing people adopted them and we have received updates from time to time.  At Christmas I received in the post a gorgeous calendar of pictures of the girls in various aspects of their new life.         “Now then" I was supposed to pass this calendar on to Sam who fostered the girls while we looked for their new home.

Well the calendar remained on my desk for a few weeks and I showed it to various people who happened to be around when I saw it.  Last week we had a call from the previous owner’s family who said it was their Elderly mother’s birthday and she had been reminiscing about the dogs and was wondering how they were doing.  I promptly offered them Sam’s calendar to give as a gift to their mother as I could not think of any better testament to the dogs happiness than seeing the pictures that have been taken over the year that they have been in their new home.
The family were delighted, Sam has forgiven me for giving away her calendar and we have a nice feel good factor about the whole thing. Thank you to Tara and Sally’s owners you are fab we know you have gone the whole mile with these girls in the care you have given them. We are nothing without the people that find us and our animals. 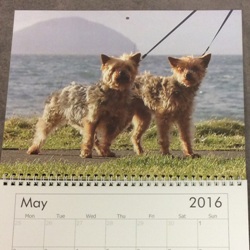 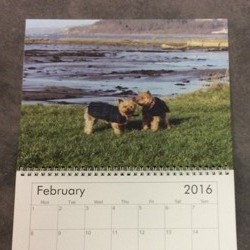