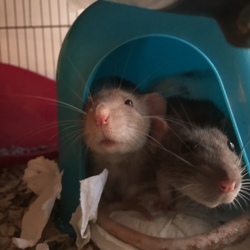 Almost at our goal of rehoming 80 rats we have two delightful girls still waiting for thier forever home.  Three months ago we had a call from a lady who had bought one rat from a pet shop to keep her single rat comapany as she had  a pair but one had died.  Unfortunately the pet shop gave her the wrong sex she had specifiied a male and had been given a female, a short while later there was a litter and another she rang us and we took 23 rats from her.

we separated the girls from the boys and a week later we had 60 rats followed by a call from someone saying they had found a picnic hamper in the back lane with a couple of rats in in we got them collected and when we opened the basket there was 18 rats then there was a delightful foreign student who had been told that if she did not get rid of her two rats she would be out of the accomadation by the weekend  so we had 80 rats in total.  We took a few deap breaths and got on with the separating the handling and the sourcing of homes for all these guys now on the 3rd feb we just have two pairs left two girls and two boys.  the rats have all been outstanding in thier temprements and have all gone to fab homes.  Well done to Samantha who has come almost every day for the last three moths to clean and see to them all and thanks to eveyone who  took rats from us to give permanent homes  we would love it if everyone who took a rat could post pics or videos and updates for our facebook page it would make a stunning collection and would be great for Samantha to see them all grown. And of course we are looking for just one more home for the two girls that are left to what has been a marathon.