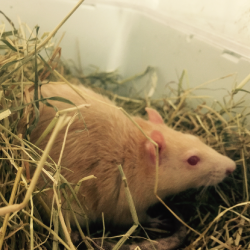 We received a phone call from a lady in South Denton saying there was a white rat in her garden. We left a humane rat trap set. A couple of days later she rang to say there was rat in the trap but not the right rat. This one was a brown! We collected the trap with the rat. When the rat arrived he was the most adorable tame rat with slightly curled whiskers. 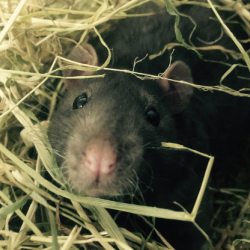 He spent the next 24 hours with a pieces of food in his paws eating to make up for lost time.

He is a very lucky rat because most people would have assumed he was a wild one A couple more days went over we set more traps but did wonder if the white one had succumbed to a cat attack or indeed a rat attack.

The phone rang and the white rat was in the trap we collected her and brought her in once again hungry and tiredThere is a strong possibility that she is going to have babies she certainly looks a little large in that area.

We have left the traps down for a while longer just in case there were more than two. Look out for more news on these two.

We may never know if they are genuine escapees or if they were abandoned, but they were certainly lucky they picked the right garden to hang out in. We've named them Denton and Suzie.