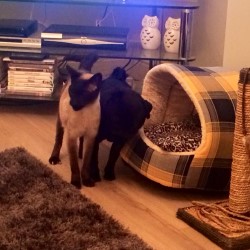 On the night of Maundy Thursday, at the beginning of the Easter Bank Holiday, we had a phone call asking if we could help with a dog and a cat who's owner had died.  We went straight out to pick them up as there was no one to care for them overnight and was pleasantly surprised to find a youngish pug and an elderly Siamese cat. Both were friendly and delighted to see someone.
It was not possible to keep them together at Pawz.  Alone the cat became a withdrawn but came alive as soon as he saw his dog, Cheeko.  We asked the pug rescue if they would find a suitable home for Cheeko as they know the breed better than we do. As soon as she was spayed she went to her new home and has settled in very well. She is living with another pug whose lead she follows as this little girl had not seen a lot of anything other than the inside of a house for years.
Once the dog had been re homed we thought "this cat really needs another dog to live with "similar to the dog he had been used to. Tentatively we asked pug rescue  if they would put out an appeal to any pug owner that may like to give Suki a chance of happiness living with animals he had known and loved namely pugs.  They said they would do their best. Very quickly fhey came up with more than one option for him.
Suki went to his new home with two pugs last night. He came out of his box and decided on his new special friend immediately, the female. The male dog is OK but Suki has taken a shine to the female. Tonight we received a picture of Suki with his new friend.
Moments like these really make our hearts leap for joy. Thank you to pug rescue for getting Cheeko into a home so quickly and a huge thank you to them for putting us in contact with the two delightful ladies who offered Suki a home and thank you to both Cheeko and Suki's new owners. we are nothing without the people who give the animals we have homes.